Check out this book by Dr. David Servan-Schreiber who survived brain cancer by changing how he eats. 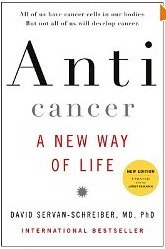 How I built my site and how it is changing my life.