How are organic foods better? There are many positive health benefits you can expect from consumption of healthy organic foods.

The synthetic additives used in conventional farming are harmful because when your body absorbs them from the vegetables, grains or meat you consume, they can lead to different types of tumors.

Livestock grown conventionally are injected with hormones to make them grow faster. Hormone residues then are passed on to the meat you buy and eat. The hormones from animals can increase your risk for breast tumors.

Organic foods are far superior in terms of health advantages but most people don't choose them over conventional ones. The downside to organic produce is their prohibitive cost. 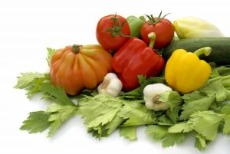 If you compare organic to conventional crops, those grown organically have more “dry matter”. This means organic crops have more nutrients per kilo. They are healthier because of their much superior amount of nutrients. They also provide better prevention for many diseases like tumors.

Organic produce are grown with natural fertilizers such as the use of compost materials or manure.

Do you know how organic crops fight back against pests that attack them? Organic crops rely on their own natural defense system which consists of thousands of phytochemicals.

This translates to organically grown crops having 10 to 50% higher, healthier, better and more active levels of phytonutrients especially antioxidants.

Studies show that synthetic pesticides have negative effects on your nervous system and affects fertility in both men and women.

3. Absence of Antibiotic and Hormone Residue in Animals

Red meat such as beef or veal is on the list of cancer causing foods because it contains saturated fats that can cause inflammation. What's worse is meat that comes from livestock grown conventionally. Animals raised in a conventional farm are given antibiotic and growth hormone shots. Meat that comes from them contains antibiotic and hormone residues.

Antibiotic residue in animal meat contributes to the growing medical problem of increased antibiotic resistance to bacteria among humans.

Hormone residue can also increase risk for tumor development. Hormones are important risk factors for some common types of cancer such as breast, colon and prostate.

Why are organic foods better for cancer prevention?

Tomatoes are one of the known anti-cancer foods because of the lycopene they contain. Organic tomatoes are found out to have more lycopene.

Phytochemicals such as polyphenols, help you on prevention of cancer. Organically grown potatoes have more polyphenols.

Going organic is better because it is the safest as it eliminates pesticide residues which may cause harm.

In fact, a study done by Belgian researchers said that women diagnosed with breast cancer, one of the leading types of cancer, were 6 to 9x more likely exposed to the pesticides DDT or Hexachlorobenzene.

Be sure to serve your family only organically-grown and produced food especially now that you know how are organic foods better in preventing cancers.

Top of Are Organic Foods Better