Facts about Alcohol Abuse
and Its Physical Long Term Effects

There are many facts about alcohol abuse that can explain why a lot of people get addicted to it, what are its physical long term effects on your body and how having more than one occasional drink makes cancer prevention more difficult.

What makes it dangerous? Here are the facts: It is one of the oldest recreational drugs known to man. It is labelled as a psychoactive drug which means it can change the way your brain works and perceives things. It is extremely open to abuse.

Alcohol is addicting and its effects are manipulative. It initially creates positive changes – euphoria - in your mood when taken in small doses. The person who drinks gets a boost in his self-confidence.

The feeling of euphoria leads the person to desire to feel pleasant again by drinking once more. Until he starts to abuse it. Alcoholism is a result of heavy and frequent drinking. 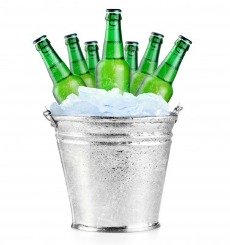 According to facts about alcohol, its main ingredient is ethanol.

Ethanol is a colorless, unstable and flammable liquid. It has long been used by man in alcoholic beverages. It is also called as “spirits".

Ethanol becomes carcinogenic when your body breaks it down and produces acetaldehyde.

Facts for you to know: Having one drink occasionally, your body makes acetaldehyde in a small quantity and no harm is done. It is when you abuse drinking too much and frequently that your body produces a high concentration of acetaldehyde.

This seemingly innocent substance is also what gives you hangover. If you wake up with a nasty hangover the next day after a night of drinking, it means your body has produced a huge amount of acetaldehyde.

According to facts given by the National Institute in Alcohol Abuse and Alcoholism in the United States, "Acetaldehyde appears to react with polyamines - naturally occurring compounds essential for cell growth - to create a particularly dangerous type of mutagenic DNA base."

Alcohol is one of the known carcinogens to man but awareness of the facts about its carcinogenicity have not stopped man from its abuse.

Its abuse leads to damage to the DNA of your healthy cells. Pancreatic and breast cancers are just two of of its serious health effects.

Your cells are equipped to repair themselves. But if you abuse your body and you expose yourself constantly and frequently to acetaldehyde, your cells become weak and their ability to fix the damage is affected. The once-healthy cells become abnormal and may likely develop into a malignant tumor.

If you drink, do so in moderation. Here are the facts about alcohol abuse: Moderate drinking is defined as one to two drinks per day. One drink is equivalent to 12 ounces of regular beer, or 5 ounces of wine, or 1.5 ounces of 80-proof liquor. Having more than 2 drinks a day is too much already.

Its dangers are insidious! You don't see or feel immediately how it damages your cells but it slowly chips away on your healthy cells.

Alcoholic beverages don't result to immediate negative effects but they slowly destroy you. It partners with the effects of tobacco use to trigger many types of cancer.

Prevention of lung cancer becomes more challenging when you smoke and drink at the same time.

Top of Facts About Alcohol
﻿