All the information and facts about lung cancer you need are here!

What are the facts? It is one of the leading types of tumor and the leading cause of deaths due to the disease worldwide.

It has already surpassed breast tumor in causing deaths among women. Smoking is one of the known and proven causes of lung tumor. It has 2 types: the non-small cell (NSCLC) and the small cell (SCLC).

The tumor develops in and attacks the tissues of your lungs. Ninety to 95% of lung tumor begin usually in the cells lining both the larger (bronchi) and smaller (bronchioles) airways. That is why, it is also called as bronchogenic tumor.

Tumor that grows in the lungs affects the elderly more. In fact majority of the cases are diagnosed among people 65 years old and above.

Tumors do not grow overnight or in a day; they are caused by continually subjecting your lung cells to environmental toxins such as those coming from cigarettes.

The Facts On Its Causes

What are the causes of tumor growth in your lungs? It is actually caused by many factors. However, smoking is a major reason. If you smoke, you face a higher risk than someone who doesn't. If you don't smoke but you're exposed to second hand smoke, you still face a higher risk. Unfair facts but true!

Cigarette smoking is the reason for almost 90% of tumor cases involving the lungs. Other lung cancer causes include aging, family history and a lot more. 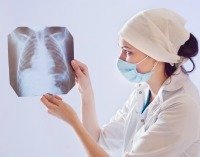 Many of Chinese women are non-smokers but surprisingly, they have a very high lung tumor rate among them. According to facts about lung cancer by Oncology Channel, this phenomenon can be attributed to exposure to cooking oil vapors and other forms of air pollution in the indoor environments of China.

But personally, I think it is also due to frequent exposure to effects of second hand smoke. I have seen firsthand how smoking is allowed everywhere in China.

According to facts about lung cancer, it was not a common type 70 years ago but due to an increase in the use of tobacco, the number of cases has ballooned rapidly.

The Warning Signs and Early Symptoms

Lung cancer is one of the most difficult types to diagnose and treat because it produces symptoms in a deceptive manner. Important warning signs of lung cancer to be aware of are . . .

Being aware of symptoms is very important because according to facts about lung cancer, it doesn't exhibit early signs.

Side effects of lung cancer can be mild to extremely life-threatening such as pneumothorax characterized by collapse of your lungs.

It is a a type of tumor that has a poor prognosis. In fact, survival rate after a diagnosis and even with treatment is a low 5-year rate. It is an aggressive type of tumor because it tends to spread very quickly.

Lung cancer staging is different for the non-small cell and the small cell types. But still, staging is important for proper treatment. Although the disease can spread to any organ in the body, it prefers some organs more than the rest. At stage 4, the most common sites favored by cancerous cells to metastasize to are the adrenal glands, the liver, the brain and the bones.

Your options vary depending on the stage the tumor is in at the time of your diagnosis. Your health condition is also another factor to consider. Types of treatment include surgery and radiation among others.

My Dad underwent radiation for his treatment. His doctor didn't advise chemo and surgery because of his age. Still, he didn't survive.

If you don't smoke, good for you and your family. If you do smoke, consider giving up the habit and reap the health benefits for yourself and your family. You might be motivated to dump those cigarettes for good.

Other ways on prevention include making sure your home is free from asbestos.

How to Prevent Lung Cancer Besides Not Smoking | Benefits of Not Smoking: Healthy Immune System

Top of Facts About Lung Cancer