If you think nothing's wrong with smoking and cancer is not one of its deadly effects, you are 100% a very likely candidate for it. Years of research have solid proof that smoking causes various cancers, especially the lung type. 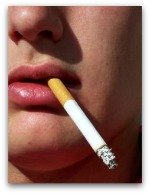 Other harmful diseases are also consequences of tobacco use. In fact, according to experts in the United Kingdom, the disease kills 5 times more people than murder, suicide, road accidents, HIV and overdoses rolled into one.

The realities from smoking and cancer are harsh. More than 180,000 people die every year from diseases caused by tobacco use.

You have the highest risk for tumor development in your lungs if:

A young body is more sensitive to DNA damage or genetic mutations. So if you started at an early age, you are a sitting duck to the deadly chemicals in the cigarette that you smoke.

And even when you decide to quit, prevention of lung tumor is not guaranteed. You have a higher level of DNA damage than someone who started smoking late.

My Dad is a good example of this. He passed away almost 2 years ago from lung cancer. He started smoking at a young age and he was a chain smoker.

It is important for you to quit. My Dad quit in his late 30s. Quitting even at a later age can still significantly reduce your risk for lung diseases caused by tobacco smoking.

And the earlier you stop, the better for you. Smoking and cancer will not be able to have you as one of their victims. In fact, my Dad was able to avoid heart disease and other illnesses associated with cigarettes.

It’s never too late to quit. One study reports that even if you quit in your 60s, prevention of many life-threatening diseases is still highly probable.

You can still experience the health benefits of not smoking. By quitting, you can still gain valuable years of life.

You are aware that smoking causes around 90% of different lung tumors. The horrors don't stop at your lungs. It causes the following cancers:

If you are female and you smoke, you're at a greater risk for 2 more types:

Not all smokers get lung cancer and die from it but statistics show that 25% of smokers die because of it. My Dad belonged to the 25%.

Surprisingly, the number of years you have been doing the habit and not the number of cigarettes you consume increases your risk.

Understanding the relationship between smoking and cancer can help in the prevention of deaths caused by cigarettes.

Harmful Effects of Tobacco Smoking | Effects of Second Hand Smoke | Tobacco Use: What It Does | Benefits of Giving Up Smoking

Top of Smoking and Cancer